Napoleon Singing His Heart Out

Perched on the marker stone commemorating the 1806 battle that saw Napoleon’s armies slaughter the Prussians and achieve European dominance, a former emperor sings into the morning light, five minutes before a warm summer rain. The marker was erected in 1990. Until then, the place was a tank practice ground for the Russian army. Everybody, it seems, got to practice being Napoleon, just a little bit. Nobody, it seems, gets to keep the place for long.

Meanwhile, down in Jena, the war continues. 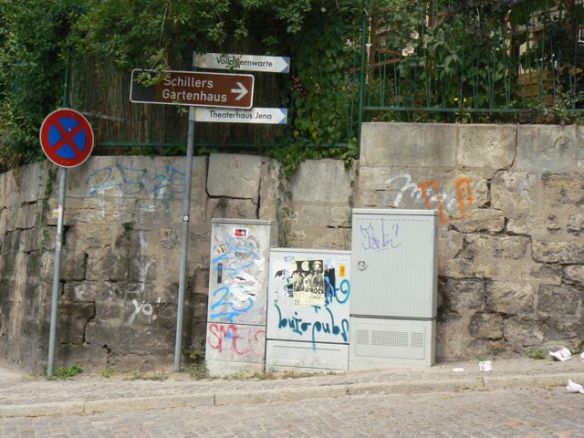 The War for Hearts and Minds

On the one side, the symbols of German culture. On the other side, German street culture. Visually at any rate, the official symbols are not winning. In a world of instant and mechanically-reproducible art, art itself becomes a quaint antique. And looking a little closer …

Downtown in Jena, most political action is fought using small glued-on posters. This one, though, was made using a marker and some bus timetables.

Hard to imagine any art gallery rising to this level of art anymore.

No wonder Napoleon is singing. As they say in Jena,

And down the road I go again.