The Origins of Art?

I have spoken many times about seeing faces in the rocks. It fascinates me. One of my current projects is an illustrated journey through the human faces in rocks from British Columbia’s Thompson Gorge, the Broughton Archipelago on the Mid-BC Coast, the northern tip of Vancouver Island, the Black Forest, the Okanagan Valley, the Columbia Basin, the Nazko, and Iceland. Here are some pictures from the European part of this project.

First, the possibly Celtic formation at Siebenfelsen above Yach (pronounce Eich) in the Black Forest. Here’s the skull at the base of the phallus: 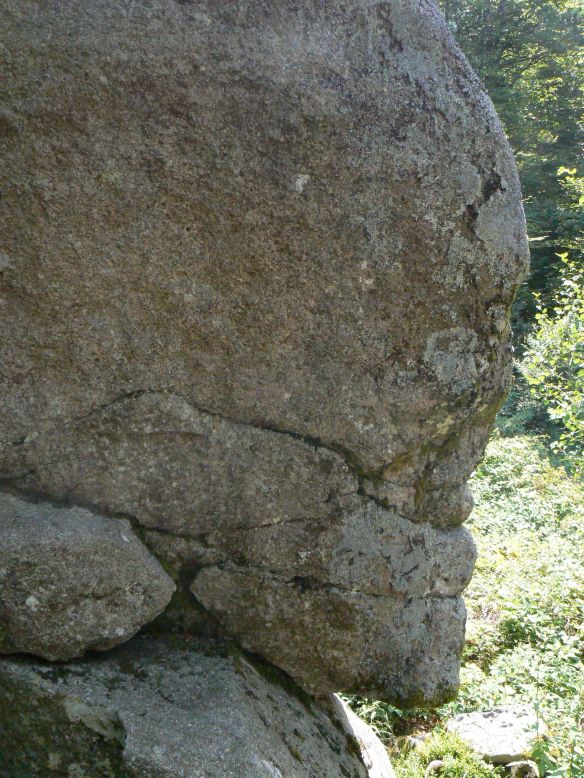 Yes, there’s a vagina right next door. Yes, it’s giving birth. Yes, there’s a navel farther up the hill, with a wild boar. Take a look at what’s below the phallus/vagina tumulus, though:

That’s how it was done. Chips were taken out of the stone along a line. Then the stones were split. The hillside below the monument is littered with humanly-altered rocks like this. Presumably, the monument was carved, much like a Canadian Inukshuk. Now, take a look at this:

Crikes. What is that, anyway? A bear? A dog? A lion? I snapped this shot as I was leaving. A big storm was pouring over the hill. I only noticed the head when I got the picture home to Canada. The site also boasts serpents and horses.

But it wasn’t just the Celts. Let’s go to Iceland. First a troll in a cliff. The cliffs here (and in many other places) contain a lot of Troll faces. This is not the strongest, but it’s cool because it has a little hand-made troll on his head. It seems that humans can’t avoid making self portraits.

And here we are closer, just a hundred metres from the cliff edge:

See what I mean? Closer yet:

But don’t think it’s all about getting cozy with the trolls. Here we are at the geysir Geysir at Geysir. Well, actually, just uphill. Warning: that red dirt sticks to your boots and you will spend a half hour scraping it out with a stick and hopping around in mud puddles. Good to know. 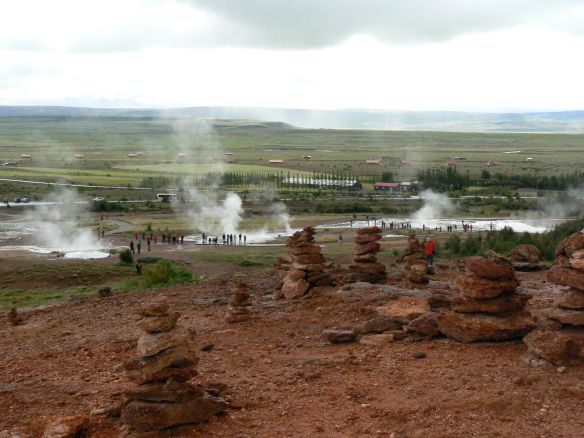 It’s enough to make one feel like one is being watched. A little closer:

Did art start like this? If so, I think it’s watching us. Virtual reality didn’t start with computers or SFX laboratories, at any rate. Aren’t humans beautiful and curious mammals? A dozen rocks on top of each other, and there you have it. You.