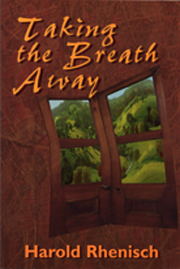 Mythic and colloquial, lyrical and elegant, Taking the Breath Away introduces us to Rhenisch’s mature poetic voice in poems characterized by brilliant imagery and continuous reinvention. Long known as the poet of the land, the poet who conjures the land to speak, Rhenisch in this new collection bridges a host of Western artforms — gothic, baroque, folktale, ballad, post-modernism and the surreal — to extend our “dumbed-down” urban vision. Humorous and elegaic at once, Taking the Breath Away ranges from Okanagan farmers and Cariboo ranchers to Plato’s Republic and German cathedrals, from mad King Ludwig of Bavaria to Van Gogh learning about Canadian snow. These are poems that lift Canadian colloquial speech into a sophisticated language that returns the world to a state of wonder.

Rhenisch’s new book is a marvel. It is full of sudden beauty. It moves us into a gentle and terrible world where you can ‘lose the wind’ or ‘taste the river in a stone.’ What delight to know there is such a song out there and someone to sing it.” Patrick Lane

“In these exquisitely articulated lyrics, Rhenisch, the Meistersinger of Okanagan poetry, resuscitates the ruined choirs in orchards laid bare by cynicism. They will take your breath away.” Linda Rogers

In a previous work, ‘Out of the Interior,” Rhenisch wrote of the potency of this place for cultural vision and our inability to find and keep to it steadily. In that work, we see the erasure of cultural traces left by a first generation German orchardist family in the Similkameen. Their vision of a new culture dies slowly within the abyss of B.C. politics. “Taking the Breath Away” is in the same vein, but the vision of promise is more intense. “Salzburg,” “Partenkirchen, ” “Freiburg im Breisgau,” track his German roots, and by contrast measure the distance from here, the distance through which immigrant families have come to shape this place, “while a black rain falls/in the night of the cities.His “surreal linkages” and “delicate observations of nature” are really discoveries of cultural promise,they are a poetry of place afforded by this landscape and the potential for meaningful life within it. This is the deeper structure that makes his imagery less the result of a surreal technique and more of a vision than Geddes would allow. Rhenisch is no social outcast, he is really much more at home here than most of us. John Whatley, B.C. Bookworld

A LAYMAN’S GUIDE TO

There are some prerequisite tools:
musk-oxen circled against the wind,
sparse grass,
rock.

Against a summer sky as blue as ice
we stand like cairns of stones
pointing the way
to winter.

Literary criticism is not about literature
after all, but about a choice of tools:

or a brace and bit.
They both make holes.

Poetry: a barn full to the roof with hay,
and rats running around, squealing;

words for winter;
translations for snow,
that drifts across the yard,

and Van Gogh
in his last weeks
standing out there,
watching us fall.