Today we’re mourning our dear friend, Winston, who held us up when we fell and showed us where all the interesting stuff was, starred in a couple books (see below), and just loved this world to bits. He was an inspiration. He was born out in the Chilcotin. Things were rough. Together with his mother and his three siblings, he was soon in the SPCA in Williams Lake, which is where he found us, chose us, and convinced us to take him home. Things were great after that. Here he is, for instance, getting a little grooming in Cache Creek, while coming home from a camping trip to the Olympic Peninsula: 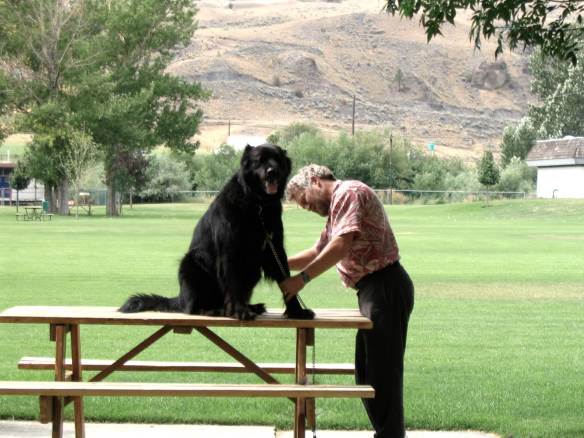 Here he is, with his cat Charles, in Campbell River… 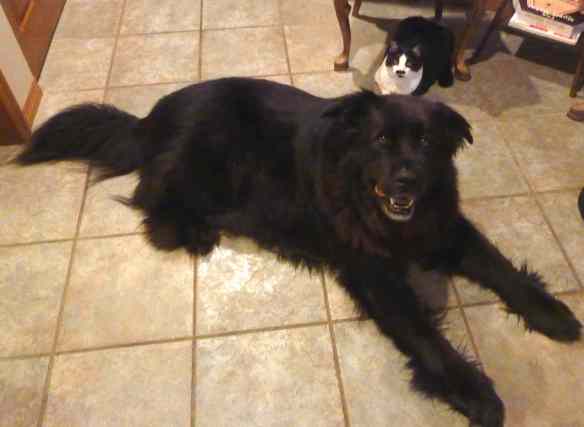 Winston and His Cat

Here he is hard at work on the set of the Okanaganokanogan blog, leading the way… 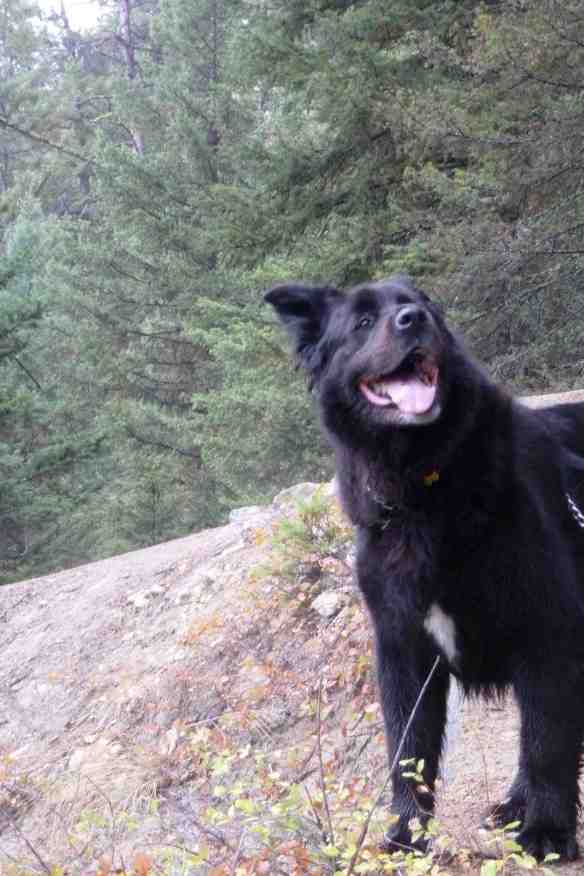 A big chunk of the spirit of the world found expression in his 125 pounds. 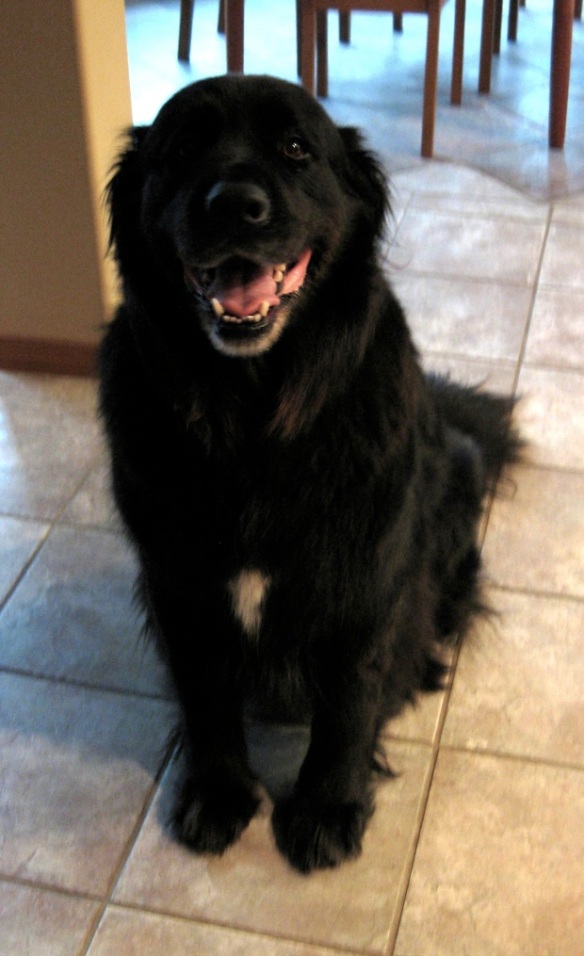 Winston fills out the final section of my Winging Home, in all his youthful zest. Here’s the poem that he helped me write on a few  walks in the Cariboo, and which won the Malahat Review Long Poem Prize. I think it’s a fair tribute to a great literary dog. I hope it is.

Winston sits out in crusted snow —
once white, now violet — while the blue
plateau moon sheds
her mesh nylon stockings.

What am I going to call a dog like that?
Who stands on two legs, cocks
an elbow over his gate and looks
me straight in the eye?

Not to mention the days the German
shepherd in him gives me
a gold-toothed glint — when
he looks like the wolf from Little
Red Riding Hood, and it’s best
just to walk away,
and quietly close the latch.

In the Vaude, in the Swiss
uplands, the Celts held
out against the Roman sons of bitches
and then against Christian
rogue monks dressed in potato sacks, whose best
trick to win souls was to feed bread to bears.
Every monk within two hundred miles sliced
and served that pumpernickel. Later,

a black dog — like, for example, Winston —
was sent ahead to talk
to the dead, and to return
with their blessings
for children and good
crops, or maybe just an old bone.

The monks of the Hospice
of St. Bernhard, where Hannibal’s
elephants had hard
going of it at the very worst
time of year, hit
on the trick of saving travelers with dogs
descended from old Roman
warrior stock,

The tonsured even crossed
their pups with Newfies to get thick coats
on them for the snow and cold
particular to those
parts — so close to Heaven (purity such
that no living man not sheltered
by his faith could withstand it),

but had to abandon
the idea when the dogs’
long hair matted with snow, and the big,
smelly lugs had to sleep
indoors to keep
warm — which is to say that, maybe, it’s not
so bright an idea
to take a seagoing
dog into the mountains, when
he’d rather be snuffling at an old, rotten fish.

I named him after Churchill,
because of the way he stuck
his tongue out
to the side, like a cigar, and, besides,
he would look good
in a top hat, with a cane, too,
and maybe even, yes, with a cod,
fresh or salted, but you can’t
have everything,
can you.

Still,
Winston does look a lot like a bear,
and in hunting season
I am tempted
to spray-paint DOG across his flank,
after all,
just to keep him safe, you understand,
from stray hunters,
who wander up into these parts from
the cities down South,

where they don’t
know shit about what lives
out on the land, but are eager
enough with their Remington
soul catchers and their quads with
gun racks and retro Vietnam
camo paint —
to claim it as their own.

He was bred as an attack
dog — some guy way out
in the bush
past Hanceville
wanted an Akita that could
take the cold, and maybe
was a little less independent,
which is, perhaps, a good
thing in a dog, I wouldn’t
know — and was claimed
by the Society for the Prevention
of Cruelty to Animals at eight weeks,
because, well,

the father had been chained to the bitch
until they bred, and none of them
had been fed
thereafter. Well, yeah. So
when I look at Winston, when I actually

see him,
as wolfish as darkling
night (at starless midnight I find him only
by the sound of his breath
and a cold nose on my hand,
like the brush
of an owl passing through shivered trees),
I think, in a moment’s stillness,
of how

both St. Bernhards and Newfoundlands
earned their size, not by being
warriors, but by bringing
people back from the dead. “Well,

Winston,” I say. “You
are a very Christian dog.
Tell me again of the nuclear
bomb that Hitler was
scheming to drop on New York; tell
me again how the Führer had a Bomb
before the Americans
turned the Columbia River
into a polluted sink, sacrificed
the salmon of the Columbia
River to build the dam that brought the power
that made the Bomb
in the ranked centrifuges at Hanford,
Washington, how the American
Army sacrificed
the twenty million salmon
of the Columbia River
for a dozen tanks of polluted water,
rusting underground and seeping
towards the water table,
where there’ll be hell to pay
soon enough. Tell me

once more of how the war was won
by democracy in those five days in May, 1940,
when you should have surrendered,
by all reason, but instead
brought all the dead men back home
across the water.
“Tell me again right now
how you were going to beat Hitler
on the beaches with your bare claws. Tell me again
how you were going to do the Punch and Judy
to his men, like some old fertility God —
yess, from the Alps, good boy! —
with a stick. Tell me
that whole sad sob story again,”

I said and patted his greasy,
waterproof fur. “Tell me again
why Hitler didn’t drop the damn thing.
Tell me again how he was afraid the Americans
would drop it right back.
Tell me again how he was afraid it would melt
through to the core of the Earth
and send us all to Kingdom Come,
not in a thousand years, but right then, in 1941 —
a fear the American men in white lab coats shared,
but it didn’t stop them, did it.
Tell it to me again, Winston.
Tell me how you saved the world from war,
because I don’t get it, actually.”

I was all ears, but what did I know?
Every night, while the moon
slips over the house and trees
blow in its spilled tides,
Winston is out there in a bed of straw,
like the Christ Child —
he even smells like the Baby Jesus
when I greet him in the straw morning —

The deer shift through lichen-hung
trees so dense the snow
stays in the branches
and in the thickets rarely
touches the dusty ground, while I,
the supposed brains behind this operation —
go on, laugh, it’ll do you good —
am inside the house. For me,

the day is divided
into dark and light, between switch-up
and switch-down,
so to speak, while for Winston, under
that moon, it isn’t,
so it’s no surprise, really, is it,
that he has other concerns,
the green and red flares
of the northern lights
above the ridgeline, the planets
overhead like yellow
stones cast across a tide flat, and the stars
like salt dried from the sun,
lifted, perhaps, on a kelp leaf and tasted,

so, while I was hoping for some
understanding

of cruelty and courage, some spark
that would illuminate the difference
between morality and logic,
even though both come,
ostensibly, from the same
source in the same briny
sea of God’s first coital word, and wondering,

still, what do you call
a dog like that, who’s as tall
as a man, and as heavy
as one, too, and has fairytale teeth,
and feathers between his feet
like a manticore
or some other beast from a book
of hours a gentlewoman prays to,

because every gentle Celt and Christian
with her shrubberies
laid out like a clock prays to animals
who have been known
to hang around the dead and give advice
to shamans,
right?

the moon rides across Winston’s pen, casting shadows
like slow hands brushing his fur,
and the moose come into the bush in back
and snap trees off at the height of my head,
so they can eat the tips another six feet up.
The cracking trunks startle me in my sleep —
even me, inside the house; deaf.

The deer come into the yard,
at night, too, and nibble and tear
at the raspberry canes
up against Winston’s wire, and he doesn’t
say a thing; in this
incarnation Winston gives no speeches,

yet when I asked about those things
that have me terrified
for the future — that
Churchill bought us fifty
years until the end of the Cold War,
to make a future, before a time
not of our making
unmade us —

well, the clock’s unwound,
the curtain’s down, the bank’s bust,
the fat lady has sung and the janitor is sweeping
between the seats; there’s been a wind:
trees have fallen.

Now there’s a lull before an entirely
different storm,
so don’t blame me, please, for asking Winston,
who only barks when there is fog,
at night, because that
is the only time that he cannot see.

“But see what, Winston?” I asked,
this one desperate time.
“Tell me about the future,” I asked,
“by telling me about the past;
you understand.” Not Winston.
No,

he told me instead of the ravens
who had been tearing at old bones —
cow pelvises, leg bones
and skulls, blooming with lichen,
green and pink, with the marrow veins
showing through at the broken ends,
and looking very much like Innu carvings
in the Vancouver International
Airport, in their glass cases —

while people
hurry through
with bird flu and an extra mickey
of whiskey in their suitcases,
maybe, and their wireless
laptops and jetlag
espressos —

and on sale, too,
for the price of a good used
car, one
with a few miles on it,
but, so far, not too much
rust from all the salt they put on the winter
roads
up this way.

“Ravens,” he said,
“are digging the damn bones out of the snow
where I left them to lie after I dragged them
home out of the bush.”

Well, actually, Winston, darling, we both
carried them when their weight
threatened to seize up the muscles in your neck;
don’t you remember how your jaw gave out?
You wouldn’t trust me at first,
but then you did,
with the black shadows of ravens flying
overhead
between the green flames of the trees that prickled my skin
as we passed, until my arms, too,
grew heavy and groaned with the weight
of carrying
those bones for miles,
which is way too far. For bones.

Nothing. Just the ravens.

Well, what did I expect?
The poor bastard is just a dog, after all, and,
although overly large and fiercely
independent, knows nothing about how
to conduct a war
after it has been lost and everyone says
it has been won.
I should have seen it coming.

“Those ravens,” he says. “God,
let me tell you about those ravens.”

Of course, in these conversations,
it does appear, from a distance,
that I am doing all the talking, but that’s only because,
unlike me, Winston
speaks without a single
word, and what’s more, he understands
every grief I refuse to
howl in return. 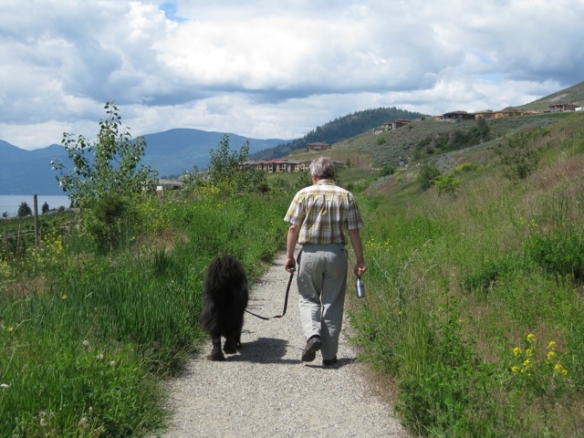